In the summer of 1961 at Yale University, social psychologist Stanley Milgram began a provocative experiment to test individuals’ willingness to obey orders from an authority.

In Milgram’s experiment, explained to the volunteer subjects as a study of the effects of punishment on memory and learning, each participant played the role of a “teacher,” who was instructed by an experimenter to deliver an electric shock to a “learner” for each mistake made when recalling word pairs. In fact, the learner was an aide of the experimenter—a confederate—who did not actually receive shocks for his many deliberate errors. 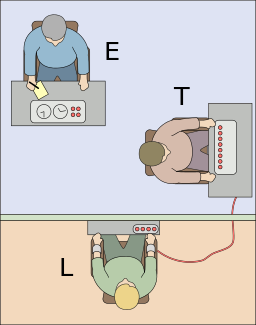 The shock generator included 30 switches, labeled with values ranging from a mild 15 volts to a dangerous and potentially lethal 450 volts. The learner sat in an adjoining room, unseen by the teacher once the test began. Surprisingly, 65% of participants were obedient to the instructions of the experimenter, continuing to deliver what they believed were shocks of increasing intensity up to the 450 volt maximum despite the vocal protestations and apparent suffering of the learner. The obedience of the teachers has been described as occurring in an agentic state, a psychological condition in which an individual, as a subordinate to a higher authority in an organized status hierarchy, feels compelled as an agent of that authority to obey the orders issued by it.

Milgram’s experiment remains indelible because of both his findings and his controversial methods—so much so that 54 years after those initial sessions at Yale, the man and his work are the subject of a new feature film called Experimenter: The Stanley Milgram Story, starring Peter Sarsgaard and Winona Ryder. The movie touches on Milgram’s later work as well, which is also fascinating if less widely known.

Those interested in issues of compliance and authority also may turn to APA’s 2013 book The Psychology of Dictatorship by Fathali M. Moghaddam, which discusses the importance of psychological processes such as displacement of aggression, conformity, obedience, fear, and cognitive dissonance as tools that aid the development and maintenance of dictatorships. These have remained crucial topics since World War II, the horrors of which were only in the recent past when Milgram began his study at Yale.

Obeying and resisting malevolent orders. (2004, May 25.) Retrieved from http://www.apa.org/research/action/order.aspx